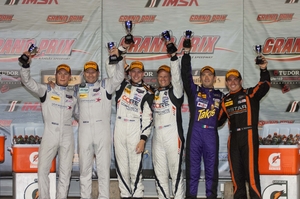 June 8, 2014 – Mishumotors/Starworks Motorsport claimed its third successive podium with Renger van der Zande and Mirco Schultis in the #8 Martini liveried Oreca Chevrolet FLM09 in the TUDOR United Sportscar ‘Grand Prix of Kansas’. The Monterey GP winning pair take home a second placed trophy.
The jam-packed two-day event at the Kansas Speedway commenced on Friday afternoon. After solid showings during all practice sessions , Mirco Schultis on hot-lap duty, set the eighth fastest time.
The TUSC Grand Prix of Kansas comprised two 45 minute races for the Prototype Challenge and Prototype Lites classes only on Sunday evening. The results of race one determined the starting grid for the weekend finale later that night and all data rolled over in continuation.
The Mishumotors/Starworks Oreca then experienced motor issues affecting their straight line top speed during segment (race) one. Mirco experienced a spind out on track after being hit in the rear and finished the 33 laps race P7 respectively out of the 10-cars PC field.
Renger van der Zande took over the 8 car late on Sunday night.
A solid start was followed by a lengthy full course yellow, but a fantastic re-start ensured that Renger was immediately up to P2 just after the flag went green.
Renger drove a blistering race, fiercely attacking and defending to claim another Championship podium for the Fort Lauderdale based squad. The second placed trophy, shared with team mate Mirco Schultis, continues the #8 Starworks Oreca-Chevrolet FLM09 podium run after a third at 12 Hours of Sebring and the first overall PC win at the Monterey Grand Prix.
Renger van der Zande, #8 Starworks: “I had a good start and then waited for my moment. On the second lap after the restart I got a good tow off Tagliani and then made a move, braking on the outside and then darting down the inside of Diaz and it worked. We were slow on the straight all weekend and I had to defend a lot in the race; I think we got the maximum result we could. It’s more good points for the team, however, and a great podium streak for the 8 car, so we are very happy.”
Mirco Schultis, #8 Starworks: “It is another great podium feeling for us. The Kansas track is amazing for a European to drive on; it is extremely fast and I enjoyed every minute. Renger is nuts! He drove a superb race and the team did a great job all weekend.”

← Prev: Victory at the 12hours of Zandvoort Next: Win for Mishumotors/Starworks LMPC in Road America →