Points for MISHUMOTORS/Starworks at 52nd Rolex 24 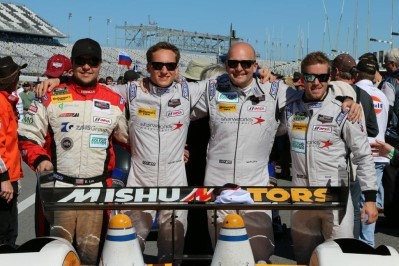 Mishumotors/Starworks Motorsport achieved a respectable fifth place finish in the Prototype Challenge class of the 2014 Rolex 24 At Daytona.

Despite experiencing steering gremlins with the 8 car during practice sessions for the Rolex 24 last week, Renger van der Zande qualified the car in P2 on Friday. Within minutes of the race start on Saturday afternoon, Renger set the fastest lap in class and was competing with the Starworks sister charger #7 for the PC 1-2. He held on to the lead until the driver change with Mirco Schultis who soon reported an issue with the car during his initial stint.

The 8 car was brought to the pits soon after the first Red Flag for the major incident between #99 and #62 on the third hour. The team looked to rectify a suspected steering rack problem and forty five minutes and several laps later, Eric Lux took the 8 car out for his first run.

Sam Bird jumped in to the cockpit at 9:00pm and set the car’s best lap – a 1:43.016 seconds on lap 189 – making up lost laps albeit running in eighth place. Renger was next up in the Oreca PC, but when the team tried to look under the front bodywork during his first pit stop, it refused to budge. He was sent back out again rather than waste any more time during his epic triple stint. The front nose was replaced successfully during the next driver change to Mirco who maintained P7 until Eric jumped back in to car for the long run until dawn.

Mirco returned to driving duties just before sunrise and was P6 in class when the crew’s closing strategy suddenly had to change. With just two hours of the 24 left to go, the 7 car retired from the race due to a motor fire, so it was decided that all four 8 car drivers would share the final stint in the remaining Starworks PC.

Mirco Schultis, #8 Starworks PC: “We were looking very good in the beginning, but lost a lot of time in the pits looking for a solution which in the end existed until the chequered flag. For me this is a great result; it’s the first big 24 hour race that I have finished with my own car so I am happy! The last time I raced in Daytona in 2008 we did not finish, and at Le Mans last year we did not finish so I am happy, even with fifth place.”

Eric Lux, #8 Starworks PC: “We wanted the win and we had the car to beat. I think we had the fastest time in PC too. Unfortunately though, we had a lot of fluid leak from the steering rack throughout the race straight on to our feet. We lost 31 laps looking in to the problem. Unfortunately there was nothing we could do, but we wanted to be safe and take a look. We went back out and managed to make up half the laps, but then we kind of reached a plateau about 14 or 15 laps. We went in to close and I think maybe we had a blown header or something of the sort because we were down on power, turning revs but no wheel speed. So I am glad that we were able to finish and get fifth, but disappointed we didn’t get the win because that is what we were aiming for.”