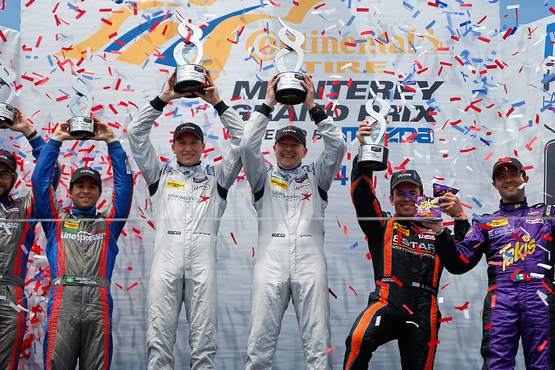 May, 4 2014: On the weekend that marked the return of Martini to professional sports car racing, the #8 Starworks Motorsport Oreca-Chevrolet FML09 took the TUDOR United Sportscar Championship Prototype Challenge class’ first overall victory in the ‘Continental Tire Monterey Grand Prix Powered by Mazda’. The event was not so kind to the team’s sister 7 car, who’s continued bad luck meant that it would join the party late and participate in only the last 30 laps of the 2-hour race.

The fourth round of the TUSC at Mazda Raceway, Laguna Seca, showcased a new condensed two-day format for the series. The field of 54 total cars was split into two on Sunday with a 31-car PC/GTD race at 1:00 ET and a P/GTLM race later in the day. Both races were two hours, a much shorter race time than past sportscar events at the Monterey track.

The Florida based squad once again utilised the driving expertise of Mirco Schultis and Renger van der Zande in the new Martini branded #8 Oreca-Chevrolet FLM09, with Martin Fuentes and Sam Bird in the new Bomberg liveried 7 car challenger. Practice commenced on Friday with a one-hour session featuring 55 cars representing all four TUSC classes with a second session on Saturday afternoon. The 8 car hit the pace straight out of the box to set an encouraging P10 time overall (P2 in class) on Friday and P12 overall (P3 in class) in the second session.

Gremlins for the #7 Starworks hit the team early. Both Martin and Sam struggled to extract power from the car on Friday, but Sam was able to set a 1:22.53 fastest lap that failed to show on the timing just as a faulty wheel speed sensor shorted the car’s wire loom. It took the team only half an hour to find the issue after second practice, but with the condensed day schedule and qualifying immediately afterwards, the team had to work on the car and miss the entire 15 minutes session. It was a reverse in fortune for Renger, who was second in PC qualifying in the 8 car with a lap of 1:20.117 (100.563 mph).

All competitors warmed up on a chilly Sunday morning in Monterey with a 20-minute final practice session. Forty-five of the 54 cars took part in the session with the only incident being a red flag following a spin by Martin in Turn 11 in the 7 car. The resulting damage to the bell housing and right rear suspension caused it to miss the start of the race a few hours later. The Fort Lauderdale crew worked tirelessly to fix #7 and eventually Martin went out and completed the final 30 laps of the race.

Mirco was therefore in the lone Starworks bullet at the start of the two-hour PC/ GTD race at 1:00pm ET. While he was running in P5 the #54 PC made contact up his inside at the Corkscrew, sending his 8 car in to a spin and bring out the second full course yellow. Mirco kept her on the black stuff until the first pit window when the team made the driver change to Renger, making up two places in the process coming up to the one hour mark.

Renger made one further trip to the pits for a ‘splash and dash’ and kept pushing the 8 car at a blistering pace. After 62 laps and with 25 minutes to go, the #8 Starworks took control of the race when leader #09 PC Bruno Junqueira went in for fuel and second placed #38 David Ostella spun and hit the wall to retire.

With the team hoping that there would be no further yellows and in full fuel saving mode, Renger took chequer in the #8 Martini Oreca FLM09 to a win the TUDOR United Sportscar Championship Prototype Challenge class’ first overall victory by 12.234 seconds.

Renger van der Zande, #8 Starworks PC: “The team did a mega job and gave us a good shot at leading the race. By the end the tyres were really gone and I was sliding everywhere, so it felt like one long, big drift to the end! To go home with main trophy is really incredible – it’s my first win in America and I am really enjoying racing here. Huge thanks to Mirco, Peter and all the guys in the team.”

Mirco Schultis, #8 Starworks PC: “I am extremely happy. Renger and I started driving together here last year and so to get our first victory at Laguna is very special. We had an excellent race; I thought at first that after the spin our race was over, but I was very happy to be able to give Renger the car and for him to continue and go on to win.”

Peter Baron, team owner, Starworks Motorsport: “It is so fantastic to get the win for the return of Martini to professional sports car racing and also for Mirco and Renger’s first win in North America. Naturally we were gutted about the damage to the 7 car in morning warm up, but the day ended on a bright note. I am so proud of how Mirco started the race and I knew we had a strategy to get Renger the lead. We had a nice alternate strategy to the others today and the crew performed it perfectly.  I had all the confidence in the world for him that once we got him the car in the lead after the last round of stops, he would bring it home that way. This was a fantastic result to push the team and Renger closer to the top of the championship.”

The fifth round of the TUSC, for P and GT classes only, will be the Chevrolet Detroit Belle Isle Grand Prix<http://www.facebook.com/detroitgp> at Belle Isle, Detroit, MI on May 30-31, 2014.

← Prev: Points for MISHUMOTORS/Starworks at 52nd Rolex 24 Next: Victory at the 12hours of Zandvoort →