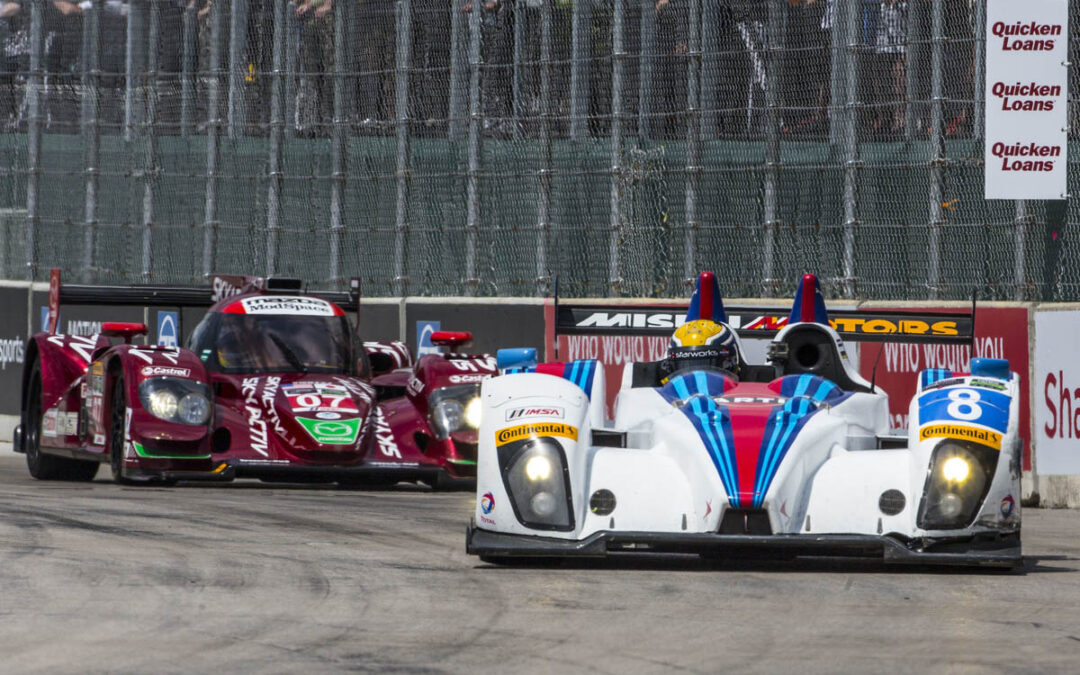 The fourth round of the 2015 TUDOR United SportsCar Championship, 29-30 May, was a flawless weekend for the squad who unloaded a perfectly prepped car to immediately post the fastest times in both morning practice sessions, in the wet and dry, without putting on new tires until qualifying on Friday afternoon.

Mirco Schultis achieved his best ever qualifying position to sit on the second row of the grid in third for the start of Saturday’s 100 minutes enduro. When the lights went out the opening lap saw plenty of turmoil. As cars from all classes scattered over the front straight ahead of Mirco he got hit very hard and lost the left rear of the 8 car’s floor and part of its sidepod. Despite the damage, the team decided to keep Mirco out and he was able to keep position, close to the leaders, and drove an impeccable stint from then on.

A full course yellow and the pace car came out just as the minimum time was reached. Mirco pitted and Peter Baron’s team performed a faultless pit stop and service, which included pulling out broken carbon bodywork parts lodged in to the car. With Renger van der Zande now behind the wheel of the #8 Oreca the team was able to make up a position in the pits and re-join the action behind the 11 car of Bruno Junqueria in third.

The last hour of the race saw sporadic rain showers with the track puddling up and drying out, producing a chaotic sprint finish. Renger expertly passed the 11 car which then spun on the following lap trying to keep pace in turn 1, collecting the 52 car to bring out the penultimate full course caution. Shortly after the restart, Renger passed the #38 Performance Tech Motorsports for the lead and never looked back. He pushed hard to produce a massive lead whilst managing the 8 car’s Continental tires and despite a late yellow bringing yet another wet restart with about 10 minutes to go, took Starworks Motorsport’s first win of 2015.

Mirco Schultis:
“This was my first race on a street course and I loved it. I was incredibly pleased to put our car on P3 in qualifying and was very happy with my stint in the race. Being a Chevrolet enthusiast myself, racing with a Chevy engine and winning the Chevrolet Sports Car Classic Race in Motor City is just amazing.”

Renger van der Zande:
“There was a lot going on! Changing conditions made it very exciting on this street track. I loved it, from the first meter out of the box and we ran in P1 most of the time. Mirco did a great job and I reckon this was his best race of us driving together. The team gave me an amazingly fast car and the ride was one big pleasure. We have a great team of people at Starworks and that was evident in a very fast pit stop. So thanks to all of the crew and it was an honor to drive the car home to victory lane.”

Peter Baron, Team Owner, Starworks Motorsport:
“It was really cool to see Mirco drive on his first street course. That was, no question, the best we have seen him ever drive. Renger shined during his specialty of driving on a wet track with slicks to bring home our first win of the year. All parts of the team performed perfectly – the crew with the prep work and pit stops, the drivers with the speed on the track and no bad luck for us, finally! I have to say seeing the car cross the finish line as the winner after the first three races of the season with terrible luck was a relief rather than pure joy. But it did put tremendous wind in our sails and we cannot wait to get back on track and go after the Watkins Glen Six Hour win.”